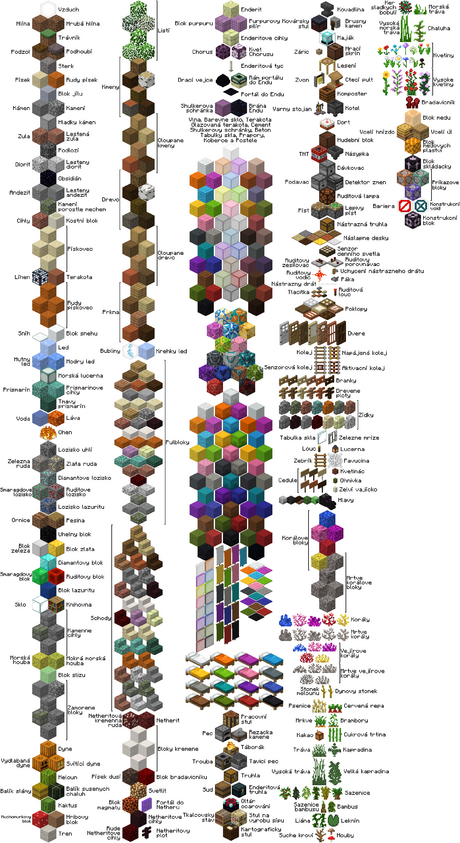 Together, solid, liquid and gas blocks build up the in-game environment and can be harvested and utilized in various fashions. Some blocks, such as dirt and sandstone, are opaque, while other blocks, such as glass and ice, are transparent.

Some blocks, such as torches and glowstone, will emit light. The amount of light they emit varies widely; see this table of light values for further information. Most opaque blocks will completely block light, while transparent blocks either have no effect on light or simply diffuse it.

Mostly, only one block can occupy a single space at a time. The only exceptions to this are snow layers‌[Pouze Bedrock edice] and water.[upcoming 1.13]

A player can automatically step up from a lower to a higher height if the difference is at most 0.6 (3⁄5) of a block.

Using resource packs, the player can change the textures and resolution of blocks, including whether their texture is animated. They can also change the shapes of blocks using models and the size of blocks to any size with equal width and height, though sizes that are a power of two tend to work better.

Plants are Minecraft's representation of plant life. Most of them can grow and be farmed to obtain resources.

Manufactured blocks can be obtained via crafting or smelting. Some of them can also be found in generated structures.

Utility blocks are used for a wide variety of specific purposes that are helpful to the player.

Mechanisms can be used to perform a wide range of tasks.

These blocks can only be accessed within the Creative mode inventory.

These blocks can only be accessed with the use of commands, such as /give.

These blocks can only be accessed in Bedrock Edition and New Nintendo 3DS Edition. In these versions, item frames work as block entities, stonecutters are only obtainable from creative mode inventory, through commands, or by inventory editing, and glowing obsidian, Invisible bedrock and nether reactor cores are not obtainable at all but continue to exist in old worlds.

These items are planned to be added in a future version.[upcoming 1.13]

These blocks can only be accessed in Education Edition.

Removed blocks no longer exist in current versions of the game.

Technical blocks. Blocks in this image are no longer available in the current Minecraft version, except farmland and mob spawner.

Technical blocks are blocks whose main functions are strictly tied to the usage of other blocks. They cannot be acquired through normal gameplay, most of them cannot be obtained with commands, but other ones require commands or mods to obtain. They serve various purposes during events within the game. If acquired, they will usually have a
missing texture.

Many of these blocks have different representations in the inventory; flint and steel is used to place fire, water and lava can be placed with their respective buckets, and blocks such as beds, doors, cake and flower pots have separate inventory items altogether.