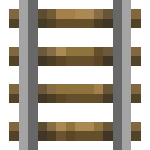 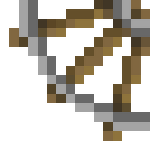 Křižovatka ve tvaru T může být napájena ruditem a obrátí se její směr. Separate tracks laid adjacent but at the next level lower or higher can sometimes cause issues. Since there are no formal rail junctions, switched T intersections are the only method by which the player can have a track system that leads in more directions than back and forth. In rare cases, curved track sections will not change appearance when their direction is changed. If a track switching mechanism seems to be inexplicably broken, test it by running a cart on the track rather than by looking at how the track appears to be oriented. Redstone circuits will not affect normal track blocks or track ramps.

If water flows against a track, it will remove it and drop the track as a resource, similar to loučes. Lava will also remove tracks, but the resource will nearly always also be destroyed by falling into the lava.

By placing a detector rail as the input of a T Flip-Flop latch, you can make a togglable turn every time a minecart travels over the rail. This can be very useful to divide minecarts evenly between two or more tracks if there is a large number coming in. 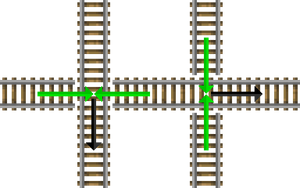 When a cart is traveling on a curve, it will momentarily lose collision prior to exiting the curve. Thus, if a block is placed directly after the curve instead of a track piece, the cart will phase through it. This can be used to kill players by suffocation, by making a 2x1x2 block on the rail after the corner. The best way to free yourself is to use a pickaxe, but the mining time is a bit longer than normal. This can be utilized to make minecarts seemingly appear from nothing, by making a hole underneath. It should be noted that since minecarts travel diagonally on curves, it can miss the hole if it has enough speed, by skipping over it, if the hole is 1x1. This can be avoided by blocking the sides. It is not recommended to use this method in rapid succession, as the cart will slow down a lot. Anyone sitting in the cart will likely be subject to suffocation. 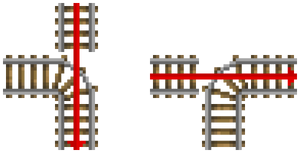 At non-curve track intersections, minecarts will always travel south or east (as shown in the diagram to the right). This is commonly referred to as the South-East rule.

This rule also applies to T-intersections, and determine which way the curve from the intersection will face when unpowered. You can use this to orient yourself. 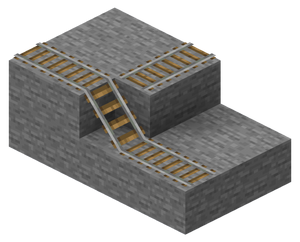 At non-curve track intersections minecarts will always travel downhill if they can. This is known as the downhill rule and overrides the south-east rule.

A block placed above the track at the downhill end of a ramp will prevent minecarts from traveling down the slope, but not up.

If a straight track piece leads to a curve block and isn't attached to the curve, a Minecart will run over the gap and continue to go straight over the curve.

Notably, the minecart can exceed the normal 8 m/s speed limit while it jumps over the gap. For example, by placing intersections on every other block of a straight track, it is possible to travel at 10 m/s in a straight direction (but it will be a very uncomfortable ride).

An example of the "floating rails" bug in an abandoned mineshaft.